The Stupa and Statuary – Foci for Devotion 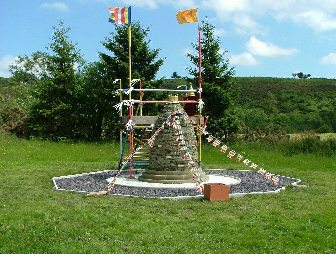 The Stupa regaled for Blessing 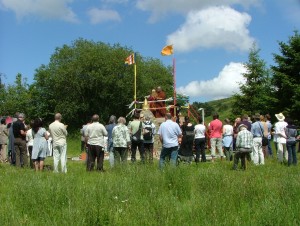 All around the Stupa 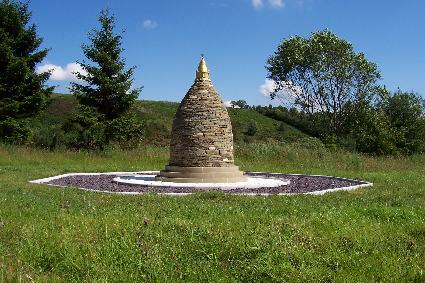 The three steps at the bottom stand for the Three Refuges, Buddha, Dhamma and Sangha. This is our saddha, faith as in confidence, trust and by virtue of this, our commitment to follow the path. The more these are polished within us, the less we are hounded by sceptical doubt.

The main body of the stupa is in dry stone walling. This suggests a cliff face and that the path towards liberation is gradual as the Buddha prefers to call it. But frankly it's hard! Within the stone work, another type of stone will be placed. Two spirals starting from the east and the west sides to form a helix, the one with eight stones for the Noble Eightfold Path and the other seven for the Factors of Enlightenment.

These too parts of the stupa are solid and rest on a considerable foundation to suggest how deeply grounded the Dhamma is reality of our lives. The foundations also contain various offerings as blessings to the ground such as: sand from a beach, a river, a small river, a mountain top and sandal wood. This 'foundation stone' was blessed at our opening ceremony in June '07.

Click here to see the programme for Ceremony of Stupa Blessing

The reliquary at the top suggests both a crown, the fulfilment of our practice and a castle, the stronghold and security of the Paths and Fruits from which we cannot fall back. The flowered turrets symbolise, therefore, Stream-enterer, Once-returner, None-returner and the arahat.

The apron of petals, 24 in all, stand for the Relations of the Abhidhamma and so for the Abhidhamma itself, a later work, but understood to be a clear exposition of the Buddha's psychology.

Within the fluted cage will be housed a CD with all the scriptures, which of course contains the jewel of the collection, The Discourse on How to Establish Right Mindfulness and all the commentaries and sub-commentaries.

The 'beehive' on top has 16 rings, the final one also being a ball, stands for the stages of vipassana insight that lead to one of the Paths and Fruits. The top ball also represents Nibbana in this life.

Within this cone relics will be placed, brought from the Mahayangama Cetiya where the Buddha is said to have placed his first footstep on Sri Lanka.

The lotus that flowers above to hold a crystal ball is final Nibbana, achieved on the passing of an arahat.

The crystal ball also represents a verse where the Buddha describes the final level of consciousness:

There is a consciousness,
not 'coloured' by any of the senses,
without boundary
and in all directions full of light.
Kevadha Sutta DN11 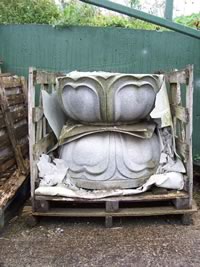 How the statue came to be at Satipanya.

I was taking a walk along the road that goes through White Grit. There was a roofer at a neighbour's house who asked him who I was. Bryan told him I was a Buddhist monk. He replied that he had a Buddha statue and later that day left me a note. Andrew who was the facilitator at the time came with me to see the statue.

Bryn Evans often visits the Far East and while in China saw this statue. Fell in love with it and had it delivered. And there it stood in his warehouse and the pedastal was still outside in its casing. Needless to say,we also fell in love with it. But it was so over-powering that we thought that if it was placed in the small grounds of Satipanya, it would overwhelm the place. So we left saying we would think about it.

Theravada, unfortunately, does not have any female representative of an enlightened being. Generally we only have the Buddha statue. For ... years there was never a human representation of the Buddha. He was always represented by a tree, chair and so on. But the main object of devotion was the stupa.

It seemed to me here was an auspicious offering to introduce the female into Theravada. Kwan Yin is the figure of compassion. And compassion is but wisdom in action. She always has a hand(s) in offering, ready to serve. When there was this very good reason for having the statue at Satipanya, we had to find a place. And here she is beneath shady trees.

I have been lookng for a statue to sit on the island and greet people at the gate. Eventually I will have a special one sculpted, but in the meantime this statue called the Earth Touching (Bhumisparsa) Buddha is just fine. It symbolises the moment before the Buddha's Awakening called the Great Doubt. This is when Mara, Evil One, assailed him and asked him who he thought he was to seek such an attainment no-one had attained.

Hopefully as people enter the gate, on seeing the statue, any doubts concerning the Dhamma and their ability to achieve liberation, is dispelled.

So how did it come to sit on the island? Much the same as Kwan Yin.

I had asked our plumber, Mike, to come and talk about a new boiler. He had just visited someone who was about to move back to Wolverhampton. Phil is a marketeer and markets are not doing well. Some time ago he had gone on holiday to the Far East and he saw a big Laughing Buddha and wanted one. When he found out the cost, it was prohibitive. Some time after, his neice was visiting India and remembering her uncle's wish, bought the statue for him. Phil had to fetch it from Yorkshire. When I asked him how much he wanted for it, he said £25 - the cost of fetching it.

It is made of concrete and looks to me to be Cambodian or Loatian. Anyway, it's heavy. He explained how he had moved it and I asked him if he would help us put it up on the island. He was only too willing. Luckily, Carl (Fooks), a chunky fellow, had come to assist on the Mahasi Retreat that Novemeber '10. So parking the estate car close to the island, Phil lay his ladder from the car of the stone on which the statue was to sit. We placed the statue on its back on a peice of hardboard and heaved it up to the stone. Once up, we gave it a tug to face the right way.

And there it sits: 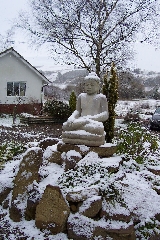 This mudra (posture) represents the deep states of concentration, but also it is the posture in which the Buddha became enlightened.

When I first started to look for a Buddha statue sit on the island, I thought one from Sri Lanka would fit the bill. Seetha (Siriwardene), Chair to our trust, generously offered to have one sent. Without really bothering to take measurments, I told her a statue a metre or more. When it arrived it was far too big for the island. I felt quite sorry for it. But when we found it a place beneath a tree, it seemed to have always been there. At first it was gold, but re-painting it with a stone texture, similar to the lime stone in the area, it really blended with the landscape.

Many thanks to Seetha and Dea (Benjamin) who painted it. 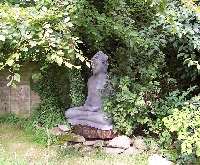 All monasteries have a  bell to waken the monastics early in the morning, for breakfast and for lunch, and at occasionally for meetings.

Because of my early practice in Zen, I thought to bring a Japanese bell. The are the best bell makers!

The housing took sometime to decide. At first we thought of a Japanese type housing, but Michelle Cobbin, an artist from Brighton, drew a simple design that located a circle atop two leaning pillars. This turned out difficult to make and look well. The drawings by the steel firm did not look good.

So, we decided to keep it simple. A brick wall to symbolise the solidity of the human form and the circle to symbolise the 'emptiness' of Nibbana. This is how it is represented in the Zen Ox-herding Pictures.

See the photos for clarification.

The Tuttifrutti Juice of Devotion

I was brought up a Catholic and as a boy and young teenager I was into devotion as kids are these days into pop music. All I can say is that it was delicious. I later lost the taste for it as I was drawn to the excitement of young manhood. But the memory remains.

When I restarted my spiritual path in my early twenties, devotion didn't feature. I was into existentialism and later Zen. Even when I began to practice in the Theravada Tradition, there was little devotion. I bowed and chanted, but more out solidarity than with heart felt meaning. I began to get back into devotional practice through metta, developing loving-kindness. After years of developing the wisdom factor, I began to develop the heart.

Now the heart doesn't work in words, but in symbols, actions and music. That is spiritual art. And the heart has certain states not peculiar to spiritual life, but pointed in that direction. The devotional heart centres around awe, amazement and wonder; praise, admiration and joy; gratitude and generosity; remorse and dedication. Such emotions we can feel towards pop-stars!

When a young child shows us the portrait he has made of us, we praise it. When someone does well or achieves something worthwhile, we praise it. When Olympic athletes break a record we are full of amazement at their physical prowess. To reflect on the discoveries and inventions of great scientists and works of great artists, is to be filled with awe.

This is how Janussoni, a Brahmin, expressed his gratitude to the Buddha:

Further, when we contemplate how we have been affected by the Buddha, the Dhamma he taught, and how indebted we are to those who have continued to refresh the Dhamma by there own striving and attainment, our hearts fill with gratitude. We bow in gratitude. And this very gratitude demands we repay the gift, unrepayable though it is, for it was all given freely. So 'repay' we must and this we do by supporting the Dhamma; by behaving according to the Dhamma; by being an exemplary Dhammika. This is what the early followers of Buddhadhamma called themselves, not Buddhists which is a western invention, but Dhammika, Followers of the True Law.

Yet though we try, fail we must. Delusion and the consequent unwholesome qualities engendered hijack us. Then we feel contrite. The feeling of remorse is healing and leads to greater resolution to follow the Path. It brings relief to the heart to apologise to the Buddha, Dhamma and Sangha and releases the energy to 'strive on diligently'.

All this amounts to spiritual love. And if we can develop this love towards the Three jewels, then we can begin to see the Three Jewels in everyone. Herein lies our solidarity with all human beings, indeed all sentient beings.

But devotion needs objects. It needs what T.S.Eliot called an'objective correlative'. It needs some actual real object that connects the Buddha's experience to us. Something we can see, hear, touch. Hence, Buddha statues and pictures, temples, Bodhi trees and stupas, chanting and ambulation.

For Satipanya to be complete, I felt it needed to nourish this side of our practice for those so drawn. So, we have built a stupa, placed a statue of Kwan Yin, the feminine Bodhisattva of compassion in the meadows, sat a Buddha statue on th island to greet guests and another beneath a tree to encourage them on their way..

Reflections on the Pilgrimage to Japan 2017