The Spiritual Director of the Satipanya Buddhist Trust is Bhante Bodhidhamma, an English monk since 1986.

Practising as a lay person: 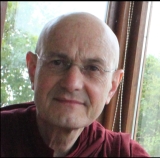 I began life in 1947 as Peter Ridley and was brought up a Roman Catholic. In my early teenage years I joined a junior seminary to train as a priest. I would not have found the Buddha's path without that foundation.

In the late seventies I began to meditate in the Soto Zen tradition with my first Buddhist teacher, Vajira Bailey, in Birmingham. In August 1979 I underwent Jukai and committed myself to Buddhism as a Zen Buddhist at Throssel Hole Priory in Northumberland.

During this period I was living in Birmingham where a Burmese monk, Ven. Dr. Rewata Dhamma, had set up a Vihara. I began to visit and out of interest joined a course of meditation in the vipassana technique with Achaan Sumedho, now the Chief Monk of the Thai Forest Tradition based at Amaravati Buddhist Centre near Hemel Hempstead. That experience convinced me that Vipassana was to be the technique that most serviced my needs. 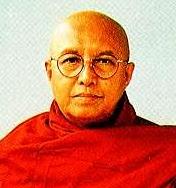 Soon after I met my core teacher, Sayadaw U Janaka of Burma (Myanmar). He is one of the main teachers in the Mahasi Tradition. I went to spend six months with him in Yangon. It had a deep effect upon me. I returned to my former job, but I began to have thoughts about joining the Sangha in order to do even longer periods of intensive meditation.

Ordaining as a monk:

Four years on, in 1986, I was ordained at the Birmingham Vihara. It was the late Ven. Saddhatissa, chief monk of the London Buddhist Vihara and author, who was my ordinand and Ven. Rewata Dhamma was my acarya (teacher). I stayed in Birmingham for two years. Before my ordination and continuing during this time, I began to practise in the U Ba Khin tradition, now most popularised by Goenkaji. I spent three month at Goenkaji's main centre, Dhamma Giri, near Bombay. A year later, I met Sayadaw U Pandita, one of the main teachers of the Mahasi Tradition. He invited me to join him at the Mahasi Centre in Yangon where he was the Chief Monk. Unfortunately the political disturbances in Burma prevented me from going. 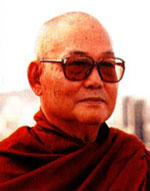 Not finding the right place to practise intensive meditation, I decided it was time to have some experience of the communal monastic life and I was allowed to join the Sangha at Amaravati where I stayed for ten months. I then joined Sayadaw U Pandita at IMS in USA for a two month course and again tried to get a visa to join him in Myanmar. Again I failed to do so because of the conditions in Myamnar. I, therefore, decided to find a conducive place in Thailand. I spent the Vassa Season (Rainy Retreat Season) at a Burmese Pali teaching monastery in the North of Thailand. I travelled around Thailand too and tasted the varied techniques of vipassana on offer.

Four years had now passed and I had still not found a place conducive to intensive meditation. Because of the good reports I had heard, I decided to go to Sri Lanka. There to my relief and joy I found an order of monks who took their ordination from the Mahasi Sayadaw himself and were devoted to teaching his method of meditation. I became a member of that order. I made my way to Kanduboda, the main centre outside Colombo and the premier meditation centre in Sri Lanka. There, Upali Thera, the Chief Monk, offered me a secluded kuti (hut) which was to become my home for the next eight years. Although that period was interrupted with home visits to UK because of family duties (both my parents died), it was an intensive period of meditation.

I returned to England 1998 to recover from an illness, but I felt it was time to leave the solitary life and return to some active participation in the world. During my stay at the London Buddhist Vihara in Chiswick, London, I was asked to teach meditation. And so began my teaching.

I travelled to Ireland, Isle of Man and various places in England teaching meditation and this culminated in a ten week-long course in Yorkshire in 2000. This experience made me realise that this is the sort of work I wanted to do, namely to offer opportunity for those meditators who wanted to do long sustained courses.

I was then able, with the generous help of friends, to establish a Centre in the north of London. My hope was to establish a meditation centre within a city. However, it became plain that meditators prefer to go to the country for any course much longer than a weekend. That experiment came to an end and I was a loose end.

In 2001 I had the good fortune to be invited to join Gaia House as the resident teacher. Gaia House is a large meditation Centre in Devon and I stayed there for four years. It became my 'Dhamma teacher training college ' offering me the opportunity to guide personal retreatants, work retreatants and co-ordinators through a wide range of difficulties and to lead intensive eight week Mahasi Courses.

During my stay at Gaia, and more so since leaving, the opportunity to teach has led to travel across England and Ireland. To date I have also had the joy of teaching vipassana in Belgium, Czech Republic and USA, but teach in Ireland, Italy, Switzerland and France.

Whilst at Gaia House, the aspiration arose again to establish a centre devoted to the Mahasi Tradition. With the strong support of friends, Satipanya Buddhist Trust was created and became a registered charity in 2002. It has taken us 5 years, but we finally arrived in 2007.

How I became a Buddhist, then a monk and then a Dhamma Teacher

Update Required.To play the media you will need to either update your browser to a recent version or update your Flash plugin

Reflections on the Pilgrimage to Japan 2017