July NEWSBYTE
Trust all is well!
All Past Tips
Tip o' the Day :
For Calendar and assistant opportunities see below .
(Difficulty reading text? Press Ctrl +)
Diary
The hot weather has brought a delight of wild flowers to our meadows. Luckily we have someone who takes the hay for horses, a better situation than in the past when it was used to feed sheep or cattle. However, it does mean we always have to cut early or the grass loses its nutritional value and so many late flowering wild plants don't have the time to seed. Anyway here are some pictures that Andy, our gardner took for us: 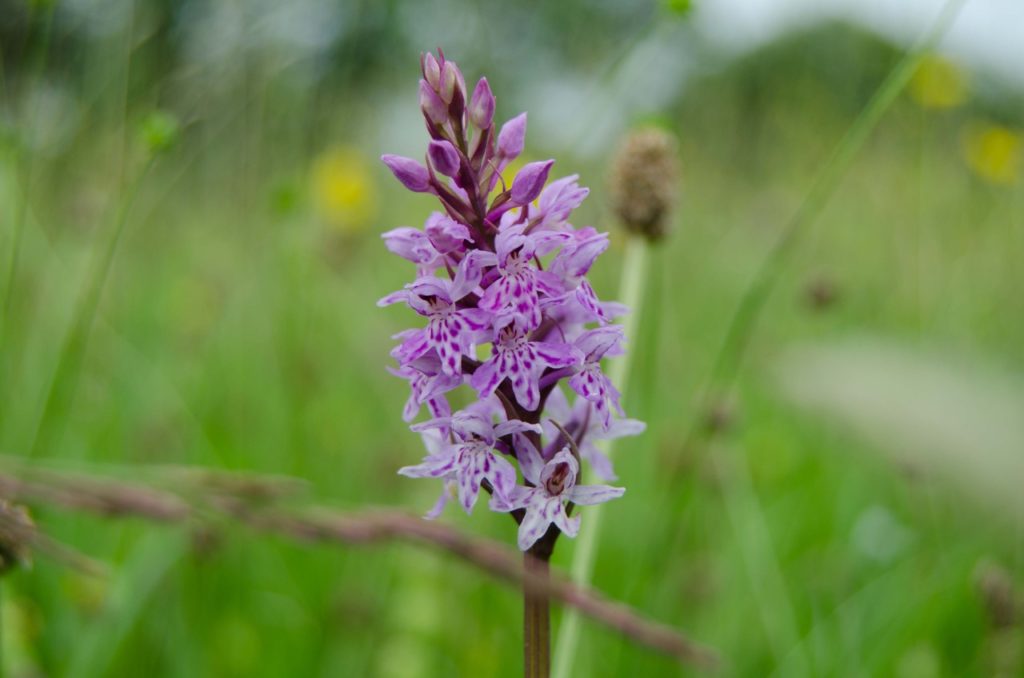 Wireless Broadband and Phone: We had our broadband upgraded to 10 megs a second. We're living in a different world! BT could only get us 1 meg! However, moving over to the wireless phone system has been a bit of mess. We have, as yet, no answer phone! So please contact us by email or ring again. Until it's fixed, we'll do our best to keep an ear out for the phone.

The Complete Calendar for 2018
Assistants Needed
N.B. All the courses are serviced by assistants.
See website for up-to-date Assistant need: http://www.satipanya.org.uk/calendar/
As assistant  you have the opportunity to serve others. It can be a way of expressing gratitude for the gift of Dhamma. Although the morning is mainly taken up with breakfast preparation and cooking, the rest of day is for practice. You can see the menus here.
As an assistant, we do not expect payment of the deposit or make a donation because you have kindly offered your time.
However, your commitment is essential, for the course would be very difficult to run without an assistant and may indeed have to be cancelled.
If you are interested, follow this link: Course Assistant
For info. about Retreats and teachers see website www.satipanya.org.uk
See drop down menus: especially About Us, Teachings and Retreats

Would you like to come and assist on a course?
Scroll down to see where we need you.

Autumn Mahasi Retreat
Sat. 03 – Sat. 24 Nov.
Ayya/Noirin Sheahan
See above for Noirin’s description.
Assistants Jenny Birkett
Preference is given to those who wish to stay for the full three weeks.
The usual schedule and format – see website. www.satipanya.org.uk

The Wisdom of Uncertainty

Idappaccayatā is a long Pali word which translates as the Law of This and That, or Specific Conditionality. In this very simple verse lies the understanding as to why we live in an uncertain world:
When this is, that is.
From the arising of this comes the arising of that.
When this isn't, that isn't.
From the cessation of this comes the cessation of that.
There are two lines of events that converge on the ever-present moment which is the event we experience all the time – just this moment.

All events originate in the past. A linear cause and effect process. They can be both caused by us or by anything else. If we play the lottery every week, we have just that less to spend. That’s a direct cause by an action we made. But one week we win a shed load of money. That is because a computer picked the numbers we needed. That is not just because we bought a ticket. To think we somehow deserved the money is superstition.

And, of course, if we resist the temptation to play the lottery none of this would happen!

However, in each moment, various lines of past events converge. This is true of every moment of our lives.

There was an event reported in the newspapers of a man who was drunk. He stepped outside the pub to take a breath of fresh air and managed to fall down a bank which boarded a road. Just as that moment a car came to that very spot. Two lines of past actions collided and the poor man was killed. That he ended up rolling down a bank and landing in the middle of the road is his own doing, but the collision was caused because someone else decided to drive along that road at that time. To think they are in some way connected save by happenstance or to think he deserved to be killed, is superstition.

If he hadn’t have got drunk, none of this would have happened!

There are two contemplations that arise out of this understanding. The first is that we don’t know the consequences of our actions. Just because we do something wholesome doesn’t mean that something beneficial will come out of it. Since we don’t know the matrix into which we are making an input, we could very well be doing the wrong thing!

Secondly, the effect inwardly, of course, is beneficial. Our inner moral life grows with every virtuous action. And again because we don’t know the matrix of our own heart-mind, talking to a homeless person, making contact in a way we haven’t before with homelessness, may lead us to join a charity or even start a charity!

And secondly, we don’t know what is going to happen because someone else has made decisions or because nature produces its own events.

A lot of our time is fairly predictable. We live in a fairly ordered society. Events that happen contrary to what we presume will happen are rare enough to cause us to be surprised or shocked. But this would not be true in a war zone. So we tend to feel safe. But this feeling of security can easily be shattered. An obvious case is a sudden death.

If every morning we spend a moment contemplating the unknowability of what will happen in the day before us, we will fortify ourselves against shock. Nor will be we become over-excited by surprises.
Because we are not so bound by ‘what will happen’, such contemplations open the day to possibilities. It undermines anxiety and makes us more flexible. We can adapt more easily to unforeseeable events.

Herein lies a lesson from uncertainty.

If you fail to receive a monthly NEWSBYTE, please, look in spam or re-establish the email by filling in the form in MAILING LIST at the bottom of the front page of the website.

Finally, please forward this email if you know someone who may be interested. Thanks.

View all posts by: Bhante Bodhidhamma